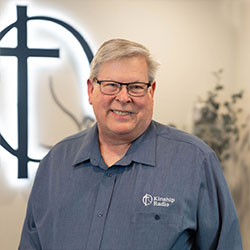 After completing 15 years of on-air ministry at Kinship Radio, Steve retired in December, 2020.  A year-and-a-half later, the Lord opened the door for him to return to Kinship Radio as its Lead Ambassador of Listener Engagement. He works with station Ambassadors, and encourages Kinship Radio donors. Steve is an ordained minister, having served as a pastor for many years. He’s also is a diehard Cleveland sports fan. Steve and his wife Jan have been married since 1975. They have two adult children, Kevin and Kelly, and one Grandson, Buxton.