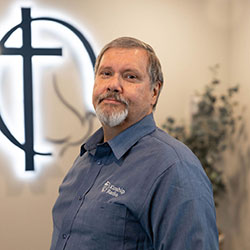 Mark is Kinship Radio’s Chief Engineer. His interest in the field was stoked when his father gave him a beginner’s AM radio kit, which he built and then listened to a Christian radio station after bedtime. In college, he received a degree in Integrated Studies in Missions from Denver Baptist Bible College. Mark then found himself back in Christian radio, moving to Maryland and serving as Chief Engineer at WOLC-FM for 26 years. He joined Kinship Radio in 2011 and has had a direct hand in Kinship Radio’s expansion in Southern Minnesota and Northern Iowa since then. Mark and his wife Carol have four children and two grandchildren.