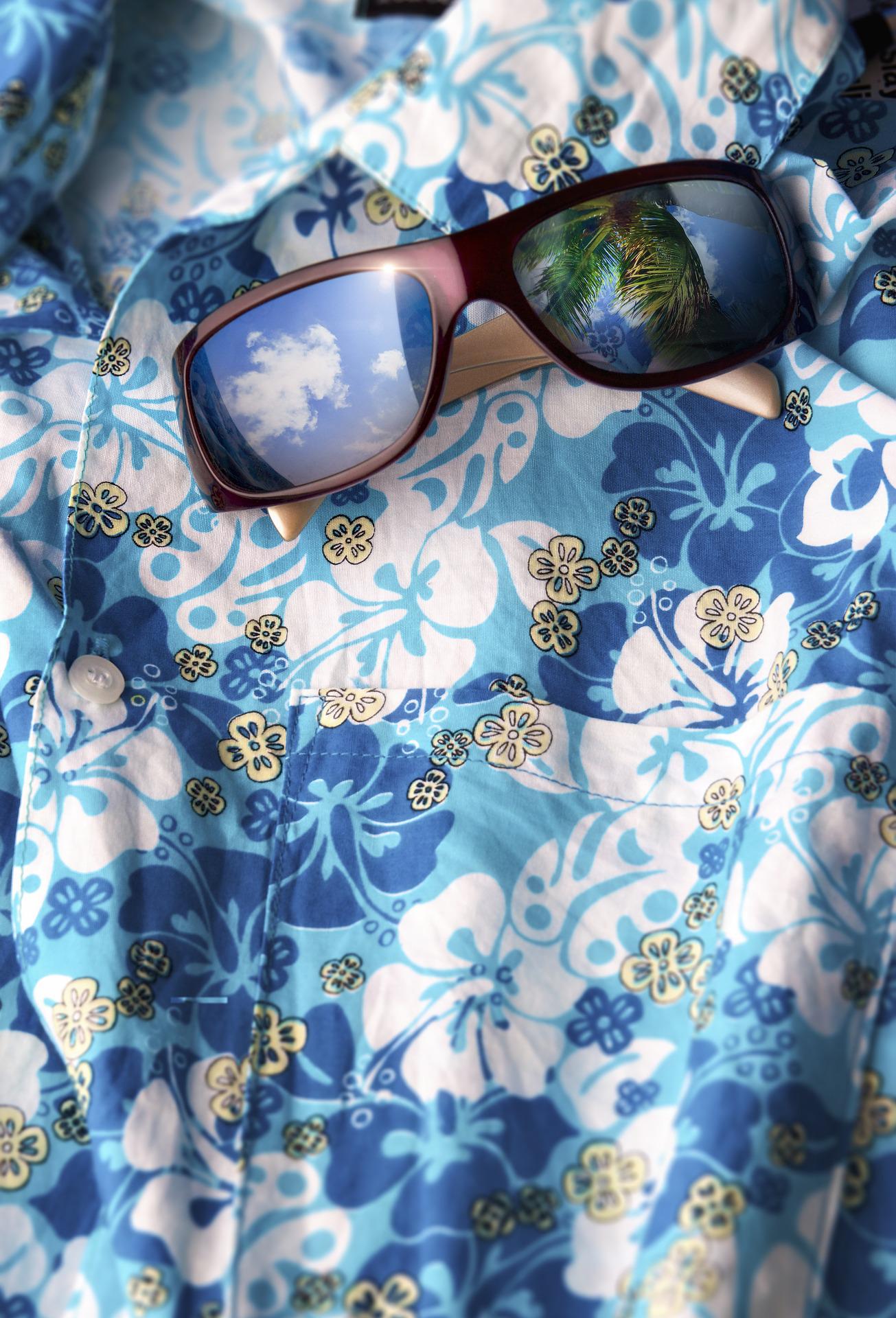 I have made no secret of my fondness for Hawaiian shirts.

On triple-digit heat index days like today, when the  degree days are pouring down and the corn is growing so fast you can almost hear it, a 100% cotton Hawaiian shirt provides unmatched comfort. (Hawaiian shirts made of synthetic fibers, on the other hand, are like wearing a plastic trash bag in a sauna. They are 100% unacceptable by my standards.) In addition, I do not have to tuck them in, and the floral prints make excellent food camouflage. I fear no drippy ice cream cone while wearing a Hawaiian shirt.

But of course, ever since I’ve discovered them, the entire fashion world has noticed the trend I set and now they are popular. Of course, this has escalated the price and limited their availability to some extent in my local thrift store.

Oh well, I guess it’s the price I pay for being so hip, happening, and “now.” (Tongue oh-so-firmly in cheek.)

I’ve even convinced Kinship Radio Executive Director Jen Hayden of their potential as comfortable and practical apparel for all the announcers. Our “vision” for the perfect shirt has radio towers and microphones on it. So far, even after hours of searching the internet, I’ve found nothing that’s truly perfect. Jen did find one that was truly excellent but it was $479. She found another one that was pretty close but it was made of “100% Acetate” which sounds like something best left in a chemistry beaker.

Why all this interest and effort in a shirt? Read on.

Back in 2019, on my first trip to Israel, Hawaiian shirts were not nearly as trendy as they are now. In fact, there were a few misguided souls who thought I was dumber than a box of home-made radios for donning my Aloha garb on that trip.

But, just as home-made radios are really not all that dumb at all, (Search “foxhole radio.”) I discovered a good Hawaiian shirt can be an effective ministry tool.

I found if I approached someone while wearing a bold floral print from the island paradise with, “Hello, my name is Dan Jones and, as you can tell, I’m not from here…” they would almost always chuckle –and a smile is a great way to open the door for a conversation.

One night in Tel-Aviv, a young man on the street even stopped me and asked if he could have his picture taken with this goofy tourist guy in the Hawaiian shirt.

Over and over again, the Hawaiian shirt made people smile and opened doors. It wasn’t  just a fluke.

On one particularly memorable night on the boardwalk in the city of Tiberias next to the Sea of Galilee,  I introduced myself and my shirt to a young couple named Aaron and Ayelet. After the initial chuckle, I told them I wrote a blog for a Christian radio station in the United States and every Christian I know loves Israel, supports Israel, and would pray for Israel if asked. I asked them, “If you could say anything at all to the Christians in the United States, what would you say?”

Aaron said, “I believe the people of the United States were chosen to be the graceful people in the imminent resurrection of the third kingdom of Israel.” He said he believed the USA was a “kingdom of grace.”

These were very kind comments and I thanked Aaron for them.

The three of us went on to have a wonderful, deep, and genuine conversation about morality and God and religion. When it came right down to it, we agreed that we all believed what we believed after much earnest soul-searching and prayer. There was a mutual understanding that all three of us were truly seeking God’s heart.

And, in my heart, I loved those two people. Yes, I had only met them perhaps fifteen minutes before, but I looked in their eyes and deeply longed to call them “brother” and “sister.”

I asked, as humbly as I could, if they would pray with me that all three of us would spend eternity in heaven praising God.

They agreed, and there in the night beside the Sea of Galilee, we prayed that prayer together. I tried to remember as I prayed that practicing Jews do not speak the name of God out of reverence but instead use “Hashem” (which means “The Name”) or “Adonai.” (Which means, “the Master.”) I did not try to “convert” them as there was a power at work there that night that was far greater than I.

As we all said, “Amen” together, I trusted that the Holy Spirit would work out if and how and when that would come to be.

I still think of Aaron and Ayelet and I still pray for them. And I still look forward to the day when I can greet them in true paradise with “Aloha, my brother and sister!”

But you will receive power when the Holy Spirit comes upon you. And you will be my witnesses, telling people about me everywhere—in Jerusalem, throughout Judea, in Samaria, and to the ends of the earth.”

Click the Kinship Prayerline logo to share your prayer request with other Kinship Christian Radio listeners.
The Time Bandit