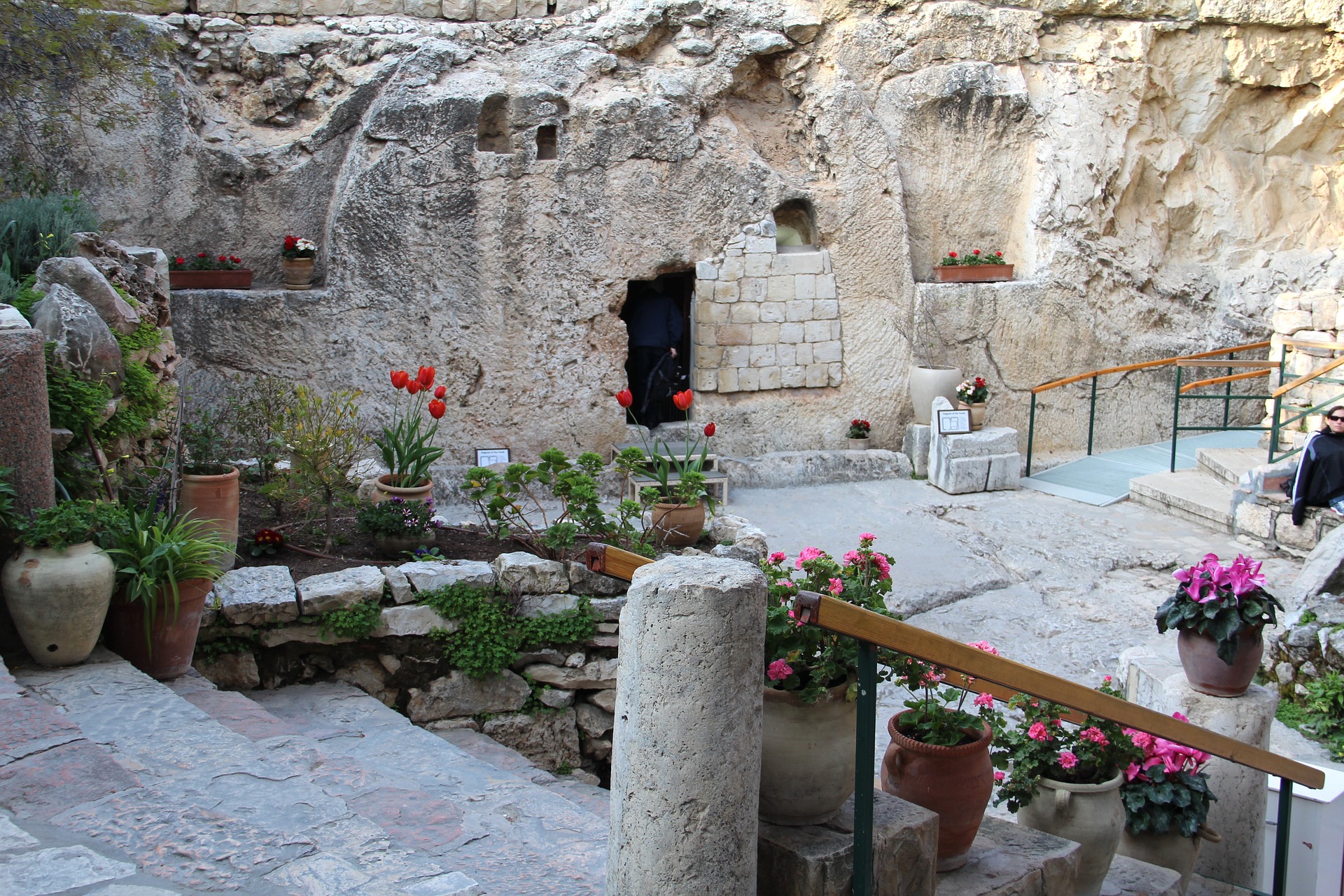 There is a place in Jerusalem called The Garden Tomb. It’s a beautiful place with lush plants growing everywhere and a tomb that was unearthed in 1867 which undoubtedly was around when Jesus walked the streets of Jerusalem.

But it is almost certainly not the actual tomb of Jesus. The Garden Tomb was constructed some 700-800 years before Jesus was born, so while it existed while He was alive, it would not fit with Matthew 27:60 and John 19:41 both of which say Jesus was laid to rest in a new tomb made for Joseph of Arimethea.

Nonetheless, The Garden Tomb is an excellent example of what was around in Jesus’ day and many, many believers frequent the site to see it.

I was there with some of those believers in 2019. As we waited to go into the tomb and look around, I was involved in a conversation with a lady named Joy. (No, I am not making that up. That is her actual name.) I had not spent much time talking to her previously, but before long, we found ourselves laughing and joking –and we were promptly shushed. We smiled knowing we had been busted, acknowledged the reverence of those around us, and continued our conversation in more hushed tones –and moments later were promptly shushed again.

Joy and I were having difficulty containing our joy.

While those around us were practicing the reverence and respect reserved for graveyards, it seemed Joy and I could not help but notice that He was not in there! In fact, Jesus was not in any graveyard because the living do not abide among the dead.

I love that song we play on Kinship Radio by Elevation Worship called “Graves into Gardens” because I’ve been there. I’ve been in the graveyard turned into a garden.

He is the only one who can, and He does it over and over again.

As we talked, Joy and I discovered that we had both come out of very dark places in our lives and into His marvelous light. Our graveyard lives had been turned into gardens.

I recently read a devotional by Pastor John Piper titled, “The Joy of the Lord is Your Stronghold” in which he makes the point that, as Christians, we should be practicing serious joy.

“We call it serious joy not only because it coexists in the same heart, at the same time, with the gravity of reverence and the groaning of sin, but also because it is not peripheral but central — serious in the sense of centrally important. It is not the negligible caboose at the end of the train, but belongs to the very fuel that runs the engine. And when I say centrally important, I mean central to God’s very being — central to God’s ultimate purpose in creating the world — and therefore also central to God-glorifying Christian living.”

Instead of viewing our lives as a “veil of tears” (as I’ve heard it expressed in one old hymn) or some punishment to be endured until at last we die and rest in peace, what if our mission and our purpose was not only to experience the overflowing joy Jesus came to give us (John 15:11) but to share it with others?

Jesus is not in that tomb in Jerusalem, and His lifeless body does not rest in peace anywhere because He is risen! He is risen indeed! He lives and moves and breathes to this day, bringing joy and peace untold to all who would simply accept Him as Lord and Savior. He continues to turn dark and foreboding graveyard lives into lush gardens of abundant, overflowing life!

Joy and I may have been shushed temporarily on that day in the Garden Tomb, but neither of us have quit talking about the joy that is in the Risen One, Jesus Christ, because we can’t help but proclaim the praises of the One who saved us from the grave and brought us into the garden He intended for us from the very beginning of time!

I have told you these things so that you will be filled with my joy. Yes, your joy will overflow! This is my commandment: Love each other in the same way I have loved you. (NLT)

Click the Kinship Prayerline logo to share your prayer request with other Kinship Christian Radio listeners.
Is It Really Either Or?

My Struggle with Christian Hedonism
Scroll to top