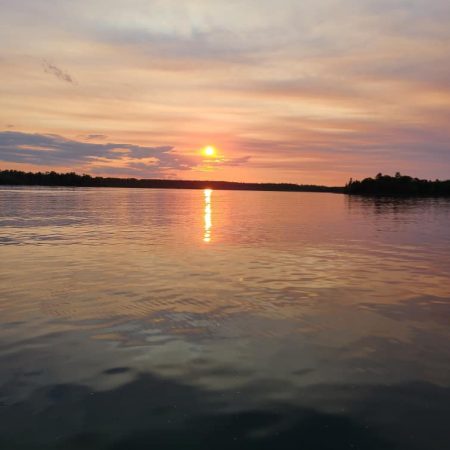 A week in northern Minnesota where the trees are tall and the lakes are deep and clear does something supernatural to the soul.

The grandeur and the majesty of these places seems to call to a particular part of me. There is a peace, a warmth, like being inside some work of art created by God Himself for His glory and out of His boundless and eternal love.

On two separate occasions I had personal encounters with some very large fish. In both instances, I had maneuvered the boat to within about 30 feet of the reed line and was casting a lure up into the reeds. The water in these areas was clear and less than three feet deep, so I could easily see all that was unfolding. In the first instance, it was a northern pike about three feet long. The second time, it was a muskellunge somewhere between three and four feet long. Both times, the fish simply appeared. I did not see where either of them had come from, but each of them leisurely swam toward my lure for just a brief second as if to positively identify it, then effortlessly turned a few degrees and silently went on its way as if to say, “I see you have thrown something into my lake. It is of no interest to me.”

The sentinels of the throne room were undisturbed, indeed unconcerned, with my presence.

The sun rose in the mornings among mist and fog and the rose glow of a new day. It set in glorious splendor, lighting the clouds from below with a calm but fiery brilliance of pink and blue and red and gold. The loons swam and fished and called to each other –all without me worrying about it or orchestrating it or checking my watch or my emails.

And the pines towered over all of it, stretching their praises to the One who made it all.

It took several days for the peace to really soak in. The striving and the busyness of life in the work-a-day world infects me and I don’t even realize it owns me, controls me, until its been gone long enough to remember what silence sounds like.

I didn’t appreciate the true fullness of the blessing I had received until I began the drive home through the dappled forest of green and red and yellow. And, for some reason, (maybe it was because Revelation Song was playing) I began to think about the actual throne room and the songs and the praises of the angels that rise continually from them before the LORD our God.
Clothed in rainbows of living color
Flashes of lightning rolls of thunder
Blessing and honor strength and glory and power be
To You the only one who’s King
(Partial lyrics from Revelation Song, written by Jennie Lee Riddle, sung by Kari Jobe.)
And it occurred to me that some of those angels had fallen away. Fully a third of them had rebelled against God, and now they were without the glorious, amazing hope and promise He had given me and all of humanity.

A third of the angels whose natural home was Heaven itself, who existed with God outside of time in His throne room forever, had chosen to rebel against Him and join with the enemy of our souls in a war with God.  Those whom He created as His messengers, as the warriors of His angel armies, chose eternal exclusion and eventual destruction over eternity with the King of all that is, was, and ever will be.

They chose to live outside of His grace.

So great was their fall from that grace, so irredeemable their rebellion, that they will never be allowed back into the throne room. They are outside of grace forever.

Jesus did not die for them.

Since the children have flesh and blood, he too shared in their humanity so that by his death he might break the power of him who holds the power of death—that is, the devil— and free those who all their lives were held in slavery by their fear of death. For surely it is not angels he helps, but Abraham’s descendants. Hebrews 2:14-16 (NIV)

Something inside me wants me to have empathy for angels who chose to become demons, to have sympathy for the devil, but something else tells me not to concern myself with biting things that I can clearly see have hooks in them.

And all the angels were standing around the throne and around the elders and the four living beings. And they fell before the throne with their faces to the ground and worshiped God. They sang,

“Amen! Blessing and glory and wisdom

and thanksgiving and honor

and power and strength belong to our God

forever and ever! Amen.”