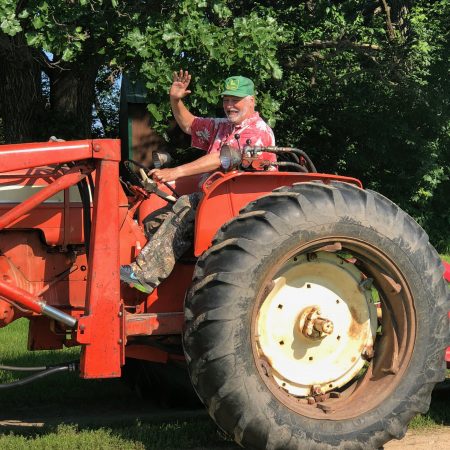 It was a hot Saturday afternoon near the end of June as I climbed aboard my unmistakably orange 1964 Allis Chalmers D19 tractor. I was wearing camouflage pants, one of my favorite Hawaiian shirts with bold red and white flowers, blue thrift store running shoes with neon-green heels, and a classic John Deere hat in (of course) John Deere green.

Mowing the ditches alongside the driveway meant being out in the full sun, so I had dressed for comfort with utter, absolute disregard for any sense of “Fashion” whatsoever.
Somewhere in the back of my mind, I knew that my choice of clothing would have sent shock waves through the Fashion Universe had even a single member of the General Public laid horrified eyes on me.
My lovely wife, who was off on an important adventure far from home, was probably fully able to psychically sense the crime I was committing against  all that is fashionable and right and was almost certainly fervently praying safety over me, lest the First Responders find me unconscious and unresponsive and attired in what many would have assumed to be a Halloween costume conceived in such poor taste that the only appropriate response would have been abject pity.
But me –I was completely oblivious.
Mowing along in the blazing summer sun, the 262 cubic inches of pre-pollution-control six-cylinder cast-iron and steel happily hummed along, chewing up the tall grass as I joyfully ran a tune I had recently enjoyed on Kinship Christian Radio through my head again and again. (“Dance in Your Freedom” by Oaks Worship)
And I was happy, because I was indeed free.
I was on my own land, out of sight of the rest of humanity and there was no fear that any Fashion Nazi could possibly convince a judge to grant him or her a search warrant for any degree of Fashion Crime Against Humanity –not even Dressing in Total Disregard of All That is Uncool.
But this is not the kind of freedom we celebrate on this Independence Day.
“We hold these truths to be self-evident: that all men are created equal; that they are endowed by their Creator with certain unalienable rights; that among these are life, liberty, and the pursuit of happiness.”
Those words from the Declaration of Independence were Earth-shattering in their day. Thirteen upstart colonies, populated by people who were supposed to be loyal to the King of England, were telling him not only that ALL men are created equal (meaning his Lordship the King was no better than any of them) but that their rights were derived from God above and NOT the King! This was treasonous.
Furthermore, these persons who were supposed to be the King’s subjects had the effrontery to contend that they had every right to be alive, to be FREE, and to pursue their own happiness.
And there, in that last little phrase, we lose something in the translation. For you see, in 1776, “the pursuit of happiness” did not mean the acquisition of enormous houses, brand new cars, and all the latest, most fashionable running shoes with neon-green heels.
No, at the time, the phrase not only meant that the founders intended to have the right to pursue (please note that the right does not guarantee the actual acquisition of “happiness,” but only the right to pursue it) not only the physical needs for survival but the moral component of a complete and full life.
James Madison wrote this in 1789 about “happiness:”
There is no maxim in my opinion which is more liable to be misapplied, and which therefore needs elucidation, than the current one that the interest of the majority is the political standard of right and wrong. Taking the word “interest” as synonymous with “ultimate happiness,” in which sense it is qualified with every necessary moral ingredient, the proposition is no doubt true. But taking it in its popular sense, as referring to the immediate augmentation of property and wealth, nothing can be more false.
The Massachusetts Constitution of 1780 affirms that “the happiness of a people and the good order and preservation of civil government essentially depend upon piety, religion and morality, and . . . these cannot be generally diffused through a community but by the institution of the public worship of God and of public instructions in piety, religion and morality.”
So, too, Article 3 of the Northwest Ordinance of 1787 affirms that “religion, morality, and knowledge” are “essential to the happiness of mankind.”
So you see, when the founders of our country made the initial declaration of its founding, at its very core was the concept of a right, guaranteed by God, to find God and His goodness.
And there is no greater freedom than that!
When one realizes that God sent His only Son to die for us, and that by believing in Him, we are adopted as sons and daughters of the Founder of the Universe, what can possibly concern us? If we are guaranteed eternal life, and promised that we will never slip from His hand, and that He will work all things for the good of those who love Him, what could possibly be more freeing than that?
If we believe the God of all that is and was and will ever be is totally sovereign and in control, how can we not shout “HALLELUJAH” for the freedom He has given us in Christ!
And, as if to make His point even more fully and adamantly, He has given us a country where we are free to worship Him. We are free to speak of His love and His mercy and His grace whenever and wherever the Spirit of evangelism moves us to do so without fear of any king or ruler or human authority.
And we can even do it dressed like the poster boy for thatboyjustaintrightinthehead.com
Today’s Praise

“The Spirit of the Lord is on me,

because he has anointed me

to proclaim good news to the poor.

He has sent me to proclaim freedom for the prisoners

and recovery of sight for the blind,

to set the oppressed free,

to proclaim the year of the Lord’s favor.